Birth of Solids: In situ liquid STEM to reveal the earlier stage of growth of nanocrystals 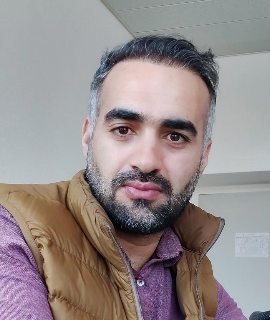 Title : Birth of Solids: In situ liquid STEM to reveal the earlier stage of growth of nanocrystals

A metallic precursor dissolved in a liquid can be reduced by the electron beam and by the reactive environment of the liquid when exposed to the electron beam, allowing us to study the exact atomic mechanisms of growth of nanomaterials. The reduced metallic species then undergo nucleation reactions and are supposed to finally form crystalline nanoparticles. Despite the fact that valuable nano-scale information of such processes can be gathered when working with commercial liquid cells1, owing to the thickness of the SiN windows and the rather thick liquid phase (typically >100 nm), atomic scale information is not accessible. As we are interested in exploring atomic mechanisms, we thus implemented two experimental approaches that allow us for studying nucleation reactions and particle growth with single atom sensitivity in liquids. The first strategy is based on employing graphene-based liquid cells, where tiny, liquid nanoreactors are encapsulated between two graphene membranes. Using this approach, we studied the nucleation of Au and Pt nanoparticles in aqueous solution.2, 3 The first step in the nucleation of Au consists of the formation of diffuse clouds of Au atoms, which abruptly undergo condensation to form partially crystalline nanoparticles. These defective nanoparticles remain surrounded by a diffuse cluster cloud, which is critical for the further development of the Au particle. Namely, the defective nanoparticle, consisting of differently oriented crystalline and amorphous parts, exchanges matter with the surrounding cluster cloud. Reattachment of the matter expelled to the cluster cloud eventually leads to mature, crystalline Au nanoparticles that show very little defective areas. Reattachment of the matter dissolved in the cluster cloud occurs by single atom attachment and by the oriented attachment of crystalline clusters formed in the diffuse cloud [2]. In the case of Pt, the formation of crystalline nanoparticles follows a more direct pathway. In a first step, Pt atoms agglomerate to form amorphous clusters. These clusters continue growing by attachment of individual atoms. After reaching a certain size (1-2 nm), the amorphous clusters undergo a crystallization step, forming 1-2 nm sized crystalline, facetted Pt particles. These particles continue growing, by single atom attachment, but also by oriented attachment of particles of similar size.

Dr. Walid Dachraoui is currently a scientist at the Swiss Federal Laboratories for Materials Science and Technology (Empa) in Dübendorf, Switzerland. He received his doctoral degree in physics from the Uni-versity of Antwerp (2012) at the Electron Microscopy for Materials Science group (EMAT). Thereafter, he carried out postdoctoral studies at the University of Aix-Marseille at the Interdisciplinary Nanoscience Center of Marseille (CINaM). He was postdoctoral researcher at the University of Paris Diderot at the Laboratory of Materials and Quantum Phenomena (MPQ). He then joined the Tarascon's group at the University of Picardie Jules Verne (LRCS and RS2E). Then he moved to join electron microscopy team at Philips University in Marburg as scientist.
Dr. Dachraoui's research interests cover various topics in electron microscopy and materials science, such as atomic resolution and low-voltage electron microscopy, as well as in-situ electron microscopy. His activity is focused on imaging the growth and degradation of nanomaterials for different applications at the atomic level and imaging battery materials (cathode, anode, and electrolyte) and their interfaces at atomic resolution and in real time during charge/discharge. He has published articles in numerous fields ranging from atomic structure of perovskite-based materials, to in-situ liquid TEM, nanomaterials, in-situ electrochemical TEM, battery materials, and materials for solar cells.