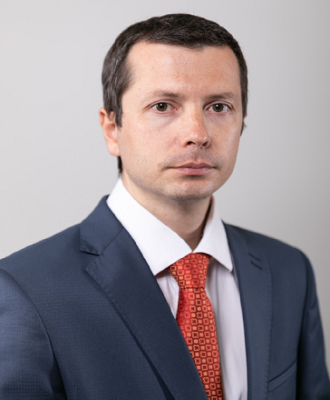 It is known that to improve the hardness and wear resistance of the surface of a metalworking tool, various methods of surface modification and coating deposition are used. Electrospark alloying (ESA) is one of the effective methods as it allows the coating deposition of conductive materials (metals, alloys). The experimental samples were steel (95Cr12MoV) cylinders with a diameter of 14 mm and a length of 10–12 mm, onto the surface of which zirconium (Grade E110) in the form of a coating with a thickness of about 30–40 μm was deposited by electrospark alloying. Further the modification was performed using induction heat treatment (IHT) at an inductor current of 1 to 3.5 kA, a frequency of about 80–100 kHz, and exposure in a carbon-containing paste (graphite – at least 50–60 wt.%, CaCO3, and Si-containing ligament – balance) at an exposure temperature of about 900–1300 °C and a duration of 2 to 4 min. The characteristics of the microstructure (along the surfaces of microsections) were studied, in particular the thickness of the zirconium coating and the presence of carbide inclusions, the chemical composition after ESA and IHT. The mechanical properties were evaluated using microindentation methods at a load on the Vickers indenter of 100 gf (microsections to a depth of about 0.2–0.25 mm) and macroindentation according to the Rockwell method (HRC scale, at a load of 150 kgf). It was established that due to ESA zirconium was transferred to the steel surface and the resulting layer was saturated with oxygen (up to 10 at.%). The microhardness of the obtained coatings did not exceed 510–720 HV at a depth of 10–20 μm and with an indentation at a depth of about 100–200 μm the microhardness decreased to 270–300 HV. These hardness values were not enough in the case of obtaining a wear-resistant coating on the surface of a punch tool; therefore, the effect of carburization using IHT was investigated further. As a result of the combined treatment, the zirconium coating structurally changed; its hardness reached 690–870 HV (with a modified layer depth of at least 120–240 μm). The increase in microhardness was also accompanied by an increase in Rockwell hardness, which was about 57–58 HRC. Thus, this treatment can be effectively used to strengthen the surface of a metalworking tool, in particular dies.
Audience Takeaway:
•    A simple and resource saving method of production of a metal cermaic coating for the punch tool was suggested.
•    The peculiarities of electrospark alloying of the surfaces of steel samples by zirconium were studied.
•    It was determined that the application of the subsequent high temperature treatment (carburization) ensured an increased microhardness and maintained high Rockwell hardness.
•    The resulting "tool steel-base – (Zr, ZrC)-coating" structure can be effectively used in the development of the punch tool designs for draw-forming and hole punching.

Prof. Aleksandr Fomin graduated from Saratov State Technical University of (SSTU), Saratov, Russia in 2005. He received a D.Sc. in "Electrotechnology" and "Metal science and heat treatment of metals and alloys" in 2017. Since 2018 he has been working as a professor at Yuri Gagarin State Technical University of Saratov (SSTU). His research interests include power electronic converter design, induction heating, materials science, surface engineering of metal items. He has published more than 50 research articles in SCI(E) journals.