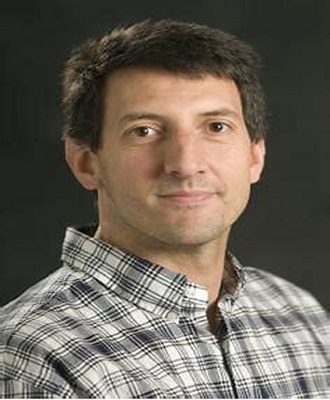 Processing of metal hybrid nanocomposites have emerged in the recent years by means of solid-state reactions through severe plastic deformation techniques, resulting in heterogenous microstructures and mechanical properties. Despite the increased scientific interest in these unusual materials, little is known regarding their comparative attributes with respect to a homogeneous material having equivalent nominal composition. This work provides a direct comparison of the microstructure and the hardness evolution of a Zn-3Mg (wt.%) alloy and its hybrid counterpart, after high-pressure torsion (HPT), and after HPT followed by a post-deformation annealing (PDA) treatment. Experimental results indicate that both the alloy and the hybrid reach a similar saturation grain size (GS) of ~ 200 nm after HPT processing, which increases to ~ 700 nm and ~ 400 nm after PDA, respectively. The HPT-processed alloy exhibits clusters of Mg2Zn11 precipitates that coalesce into larger grains maintaining a unimodal GS distribution after PDA. On the contrary, the hybrid after PDA displays a multimodal GS distribution consisting of ultrafine Mg-rich grains containing MgZn2 and Mg2Zn11 nanoscale intermetallics, in a matrix of coarser dislocation-free Zn grains. KAM maps exhibit the largest orientation gradients within the smaller grains of the multimodal microstructure, which are associated to localized strain regions. Basal texture develops after HPT in both material conditions, but it disappears in the hybrid after PDA as a result of the microstructural evolution. Hardness is systematically lower, but more uniform, in the alloy than in the hybrid in either processing condition. PDA lead to an increment in the hardness heterogeneity, in agreement with an increase in the hardenability exponent.
Audience Takeaway:
Explain how the audience will be able to use what they learn?  They will know that Zn and Mg are important biodegradable implant materials.How will this help the audience in their job? Is this research that other faculty could use to expand their research or teaching? Does this provide a practical solution to a problem that could simplify or make a designer’s job more efficient? Will it improve the accuracy of a design, or provide new information to assist in a design problem? List all other benefits. The audience will be able to put more of their effort into the Zn and Mg alloy systems knowing how to process these materials for important biomedical applications.

Dr. Carl Boehlert graduated with his BS degree in Agricultural and Biological Engineering from Cornell University in 1991.  He then received his MS (1993) and PhD (1997) degrees in Materials Science and Engineering from the University of Dayton.  He was a postdoctoral research associate at the Johns Hopkins University (1998-1999) and Los Alamos National Laboratory (2000-2001).  He joined Alfred University as an assistant professor in 2001.  He joined the Department of Chemical Engineering and Materials Science at Michigan State University in 2005 and is currently a professor there.  He has published more than 100 research articles in SCI(E) journals.