As there is no theoretical proof or observational evidence for super luminal speeds, we appeal the science community to review the basic definition of cosmic redshift. Modern cosmic foundations were inferred and developed on the concept of galactic red shift associated with the ‘observed’ and ‘laboratory’ wavelengths of photon, being defined as,

We would like to emphasize the point that, definition of galactic red shift is ambiguous. It can also be defined as,

. With reference to current definition, z value lies between 0 and infinity.

By following our new definition, z value lies between 0 and 1. It may be noted that, with our given definition, it is very easy to implement ‘light speed expansion’ in cosmic evolution scheme. As there is no physical reasoning for the observed speed of light and all the cosmological observations are completely based on speed of light- by considering ‘light speed expansion’ concept as a characteristic nature of the universe, big bang, inflation, dark energy and lambda term like ideal and unidentified concepts can be relinquished at fundamental level and a practical model of expanding universe can be developed with ease and clarity. In this context, we encourage readers to see the following graph pertaining to light travel distances prepared with our definition

(Red curve) and the conventional formula connected with dark energy density and other density fractions (Green curve). For a comparison, readers are referred to visit https://cosmocalc.icrar.org/ and http://www.atlasoftheuniverse.com/cosmodis.c. 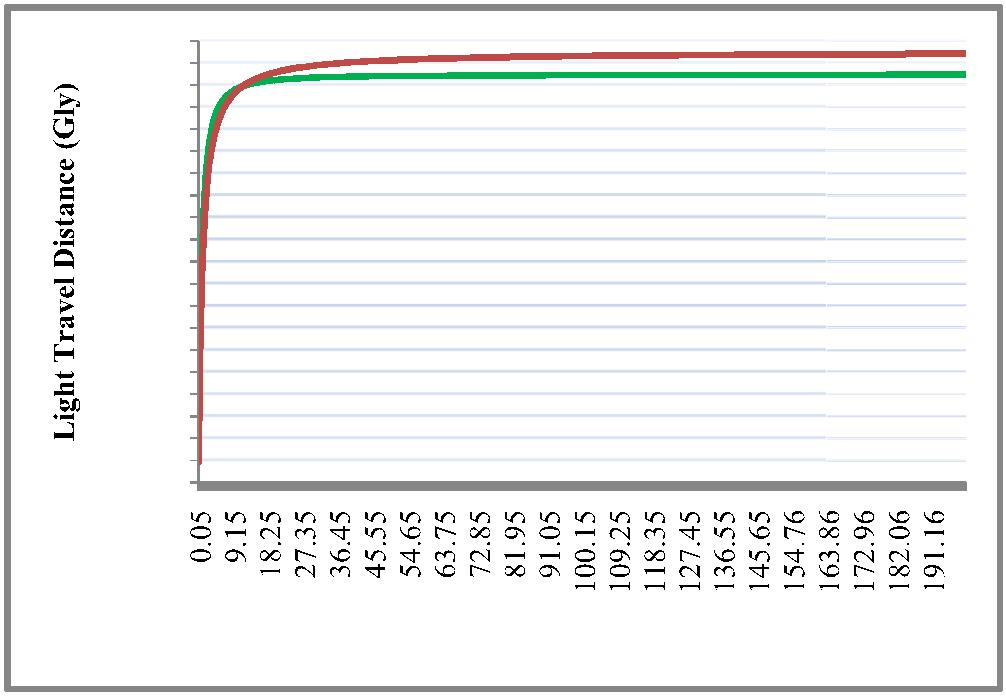 U.V.S. Seshavatharam is a mechanical engineer working as an Assistant manager in Quality Assurance department of Srikalahasthi Pipes Ltd, Srikalahasthi, AP, India. He is a honorary member of I-SERVE, Hyderabad, Telengana, India. He is having 100+ publications in numerous peer-reviewed physics journals and availing the kind guidance of retired Prof. S. Lakshminarayana associated with Dept. of  Nuclear  Physics, Andhra University, Visakhapatnam, AP, India. His current theoretical interests include Nuclear quantum gravity, Quantum cosmology and Cold  nuclear fusion. In the field of Information Technology, he  is having publications on Virtual Debit/Credit cards, Secured data transactions, Aadhar number based online medical data base for citizens of India and High quality and nominal fee certified online Digital Degree Courses. He is working on developing a theory for preparing gold like costly elements with Tungsten like heavy metals via cold nuclear fusion.